Bosavern Guest House is a stylish, upmarket, 4 Star graded guesthouse set on a cliff, offering spectacular views of the ocean, the pristine white Robberg Beach and Robberg Nature Reserve, and the green expanse of Plett Country Club. It is one of the top rated accommodation establishments in Plett. (See the Trip advisor rankings)

The owner is Barry Coulthard and manager, Veronica Orme lives on the premises.

The guest house is a 10 to 15 minute walk to the centre of town and plenty of taxi’s to catch coming home.

Plettenberg Bay is one of the special places of this earth. Sea, mountains and rivers combine with a balmy climate; flora and fauna complete the perfection of this unique bay. There is nowhere else on earth quite like the Bahia Formosa, as called by the Portuguese sailors in years gone by.

Fynbos and flowers:
The small Cape floral kingdom (Cape Town - a few hundred kilometers east of Plettenberg Bay) contains more than 8500 different flowering plants; this is more than is found in the entire northern hemisphere.

Marine Environment:
Plettenberg Bay falls within a huge marine reserve, more the 65kms long and stretching 5.5km out to sea. Common marine mammals are dolphins, whales and seals. During the winter months, the spectacular Southern Right and Humpback whales are resident in our bay.

Nature Reserves:
Plettenberg Bay has a spectacular reserve called Robberg Nature reserve and the Tsitsikamma National Park which is 45 minutes away by car.
And then of course Plettenberg Bay has the most beautiful beaches in the Garden Route. Four beaches in total - with a combined length of over 12 kms. One beach is classified as a Blue Flag Beach.

With this abundance of beautiful nature around us, the eco activities available are enough to keep one busy for days on end.

Plett is a holiday destination for all seasons. 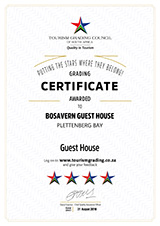